We're grateful to the Trooper who made the ultimate sacrifice in the month of August. 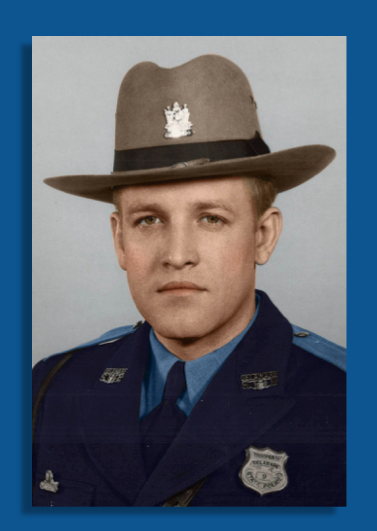 1927-1955
Trooper First Class William F. Mayer was 28 years old on that fateful night in August, 1955. He had stopped the driver of a pickup truck to warn him that his tail light was not working and lost his life. Trooper Mayer was northbound on U.S. Route 13 at Smyrna, near Duck Creek Bridge, when a tractor trailer struck the vehicle he had stopped, pinning him between the two. William Mayer was born in Wilmington in 1927, attended Wilmington High School and Rutgers University. He met his wife Ria, in Heidelberg, Germany, in the fall of 1946 while in the military. Ria was a displaced person from Latvia. The two corresponded from 1947-1949 until Ria finally arrived in America. After a brief courtship, they married in April, 1950. A member of the Delaware State Police since January, 1949, Trooper Mayer and family moved to Dover where he was stationed at Troop 3. As Ria relates Those short years were so happy for both of us. We hoped for a long life –to grow old together. It wasn’t to be…I know he was proud to be a Delaware State Policeman and loved his work. But…he was much too young to die. Trooper William Mayer was laid to rest in the Odd Fellows Cemetery, Dover, Delaware. He is survived by his wife Ria Mayer, his parents, August P. and Mildred Mayer, and three sisters, Elizabeth, Myrtle, and Margaret.

On Tuesday, June 1, 2021, the Delaware State Police Museum revealed its new exbibit which detailed the events surrounding the Lambertson Murder Case and included the renown execution of the convicted murder Billy Bailey.

On May, 21, 1979, Bailey tragically shot and murdered Clara and Gilbert Lambertson inside of their home located just north of Dover. Bailey was a habitual offender who was facing possible life in prison for a recent check forgery conviction. On this date, Bailey committed an armed robbery of a local liquor store before traveling to the Lamberston’s residence. Shortly after the murders, Delaware State Police responded and canvassed the area for Bailey. Delaware State Police Aviation located Bailey fleeing on foot. As the helicopter was hovering close to the ground, a trooper pilot jumped from the aircraft and gave chase. Bailey fired a gunshot towards the pursuing trooper, but missed and was ultimately tackled and taken into custody.

Following a successful trial, Bailey was sentenced the death penalty. Bailey refused the option of dying by lethal injection and instead opted to be hanged. On January 25, 1996, Billy Bailey was the first to be hanged in Delaware since 1946 and only the third in the United States since 1965.
The Delaware State Police Museum located at 1425 North DuPont Highway, Dover, DE, 19901, is open and visitors are welcome. Our hours of operation are 9:00 AM - 3:00 PM, Monday - Friday and the first Saturday of the month, 11:00 AM - 2:00 PM. We are closed on Federal Holidays. If you have questions, please call 302-739-7700.

A Memorial Tribute to our Fallen Heroes

Click here to view a Memorial Tribute to our Fallen Heroes.
Those who gave the ultimate sacrifice - their life.