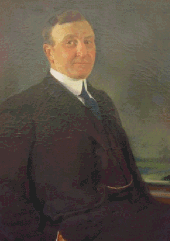 Governor Denney stated in January, 1923, "in my judgment the police force of the highway department is not adequate. I urge that a state police force be organized in connection with the highway police. There has been a demand for some years for a statewide police force . . . I believe a plan could be worked out that would gradually increase the present force . . In a short time we would have a force that would assist greatly in enforcing all the laws of the state." A bill was thus formulated in February 1923, which was destined to pass both the State House and Senate.

During the same month, Captain August Ahlquist of the Pennsylvania State Police was brought to Delaware to reorganize and train members of the State Highway Police. In conjunction with Mr. Buck, Captain Ahlquist went over the plans for reorganization, establishing a school of instruction, and accepting applications to secure more members for the department and purchase additional motorcycles. On June 11, 1923, the original State Highway Police recruit class was hired. It consisted of 9 men who were trained at Legislative Hall (the Old State House and annex) in Dover. The training school consisted of a variety of courses including criminal laws and procedures, motor laws, firearms training, traffic regulations, and motorcycle instruction.

August Ahlquist remained with the Delaware State Highway Police as acting Superintendent from April 23 to August 31, 1923, when he was recalled to 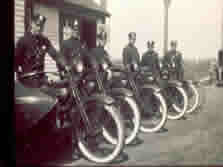 the Pennsylvania State Police. At this time, the highway department authorized the Chief Engineer to hire a "Delawarean" for the position of captain. The force, at this time, consisted of thirteen men. Nine were from the recruit class and four officers were from the original force: Raymond Ingram, Earl Cole, Samuel Powell, and Joseph Bonafacino. October of 1923, witnessed the first increase in manpower for the neophyte department as four new officers began training in Dover. They were: William Macklin, Norman Voshell, Henry C. Ray, and David Zeigler. Of the four, only Henry Ray, who was destined to become The Delaware Highway Police’s first director of training, would complete 20 years of active service.

The years 1923-1930 saw numerous changes in the complement and organization of the State Highway Police as it began to expand. Of note is the size of the force in 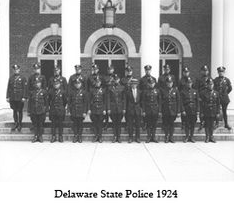 Delaware Code, was provided with a 50% pension for disability which was acknowledged as a greatly needed benefit, for prior to this, compensation for injuries occurring on the job were at the discretion of the highway department. Injuries of a debilitating nature were indeed common during the early history of the State Highway Police. Riding day and night in inclement weather, many suffered from the hardships of the dampness and the cold. Numerous men left employment with pleurisy and other illnesses. Still others had limbs severely damaged or lost in accidents resulting from the adverse road and weather conditions.

During these early years, 1923 - 1930, the uniform of the State Highway Police changed on three occasions. The 1923 uniform consisted of a dark 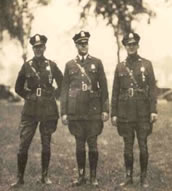 gray whipcord material, similar to that worn by the Pennsylvania State Police. It had a high military collar with silver "DEL" pins on each side. The officer’s silver badge was worn over the left breast pocket. The service revolver was worn on the right side. Leather "puttee’s" were worn above the shoe to protect the officer’s calf area. A rounded cap with peak and a silver hat badge completed the uniform. In winter, a leather overcoat and trousers were worn as protection from the cold. On May 17, 1925, the uniform was altered slightly by changing the blouse after the fashion of that worn by the New York State Police. They were as the expression of the day noted, "quite nifty." The high military collar was changed to a roll collar. On both uniforms the shoulder insignia or patch was the "flying or winged wheel".

In March, 1929, the highway commission authorized a study concerning new uniforms for the State Highway Police. Sample materials were obtained and later that same year, the State Highway Police adopted a new uniform. This uniform was radically different from its predecessor and consisted of a navy blue blouse, a navy blue wool shirt, khaki breeches with a dark blue stripe and was topped off by a navy blue eight point hat. The men wore their service revolvers on their left side in cross-draw holsters.

The years 1923 to 1929, were indeed the formative years for the State Highway Police. It was during this time that the basic infrastructure of today’s organization was formulated. Initially there were four state police facilities designated as Stations 1, 2, 3, and 4. They were located accordingly with dates of initial occupancy: 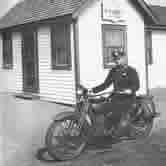 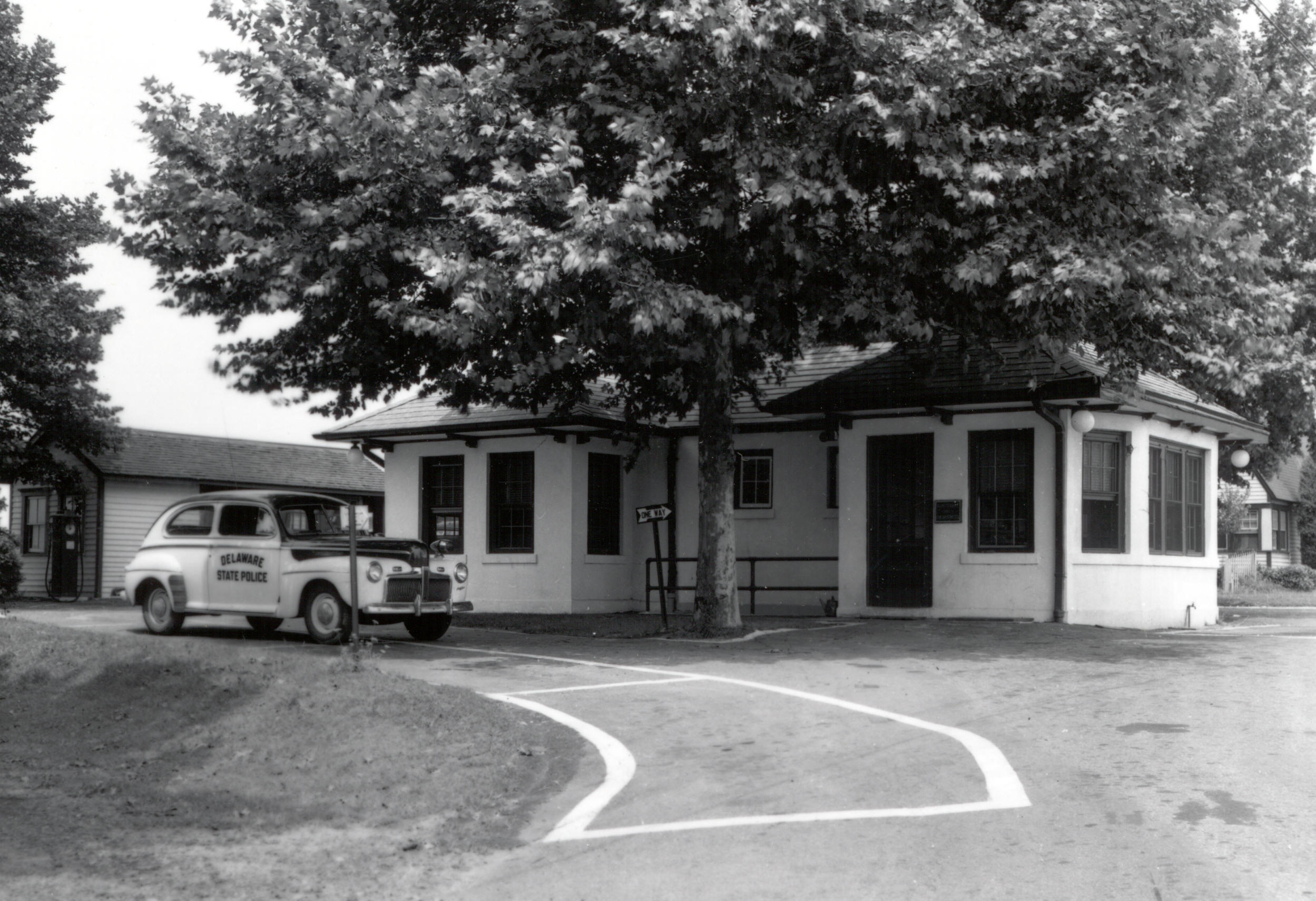 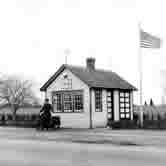 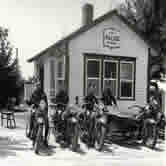 The need for an additional facility to patrol the western side of Sussex County was quickly realized and in 1925, the State Highway Police were authorized to build a fifth facility. Station 5 was established temporarily at the Seaford bridge while a permanent structure was built approximately one mile south of Greenwood. It is noted that the original state police facilities designated Stations 4 and 5 still exist, although they are in private hands.

With facilities established throughout the state to accommodate the officers, attention was now turned to manning them. This was accomplished with the institution of a permanent training facility (or at least envisioned at the time) at Dover. An excerpt from the 1924 training school exemplifies the high 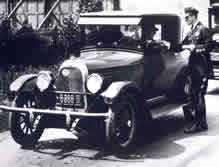 standards which were instituted: "… from a group of four score candidates twenty-four were selected. On the first day of training, men had a chance to get out on the road and show how they could direct a motorcycle. Many were nervous due to not knowing how to operate a motorcycle, others by the fact that they were not familiar with the state’s machine. Outdoor work was supplemented by indoor work and lectures. "The first group of men was eliminated by being either physically unfit or through their personalities.

This latter word pertains to the record that a man had in his hometown. If not creditable, he was eliminated. The picking of the force was at the highest standards. Mental drills and physical activity are a part of the daily training school details. Men must have knowledge of the motor and traffic laws and the laws and regulations of the state to qualify. They are given classes in arithmetic and geography, which coupled with other studies, gives an indication of their mental caliber. Chiefly those who have an adventurous disposition and meet the mental standards are selected. Most state police candidates like the open and seek the thrills that go with being in the van of anything that is going on. After a due course of examination, ten men were selected to attend the recruit school as candidates for the state police."

The mode of travel during the time period, 1923 to 1930, was the motorcycle. From 1923 to 1928, State Highway Police were assigned the famous "Indian" cycle. A number of these cycles were equipped with a side car which served two purposes. The first was a place to carry either a passenger or the poor miscreant that had the misfortune to encounter the officer. The second was to provide stability and ensure a safer ride. The stalwart "Indian" later gave way once again to the Harley-Davidson. At the 1928 annual inspection, all members of the division were assigned brand new machines as a part of their personal equipment.

In January, 1925, six officers were sent to the New York School for Police. Private Henry Ray graduated at the top of the class. Private Ray was promoted to sergeant and in 1925, became the department’s first director of training. The State Armory in Dover was opened as the first training academy in April of 1925. At this time recruits attended a three week training program. 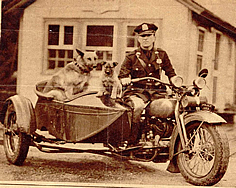 During the early years of the State Highway Police, much of the time was spent establishing the force as a "first rate" unit. In 1925, Mr. Francis duPont supplied four dogs to the department. Though more as protectors of the stations to which they were assigned, the dogs became the cadre of one of the first canine units in the police forces of America.

which had been instituted statewide in an effort to facilitate communications between the motorcycle policeman and the four stations to which they were assigned. Automobile service stations and stores along the main roads in the state were designated flag stations and issued a red flag. A list of the forty-two stations and their phone numbers were published in the Wilmington Evening Journal. Citizens requiring the assistance of the State Highway Police were instructed to call one of the published stations. The proprietor of the station would then display the special flag, alerting the passing highway patrolman. The response time to calls for service using the flag system was typically from zero to forty-eight hours.

As New Castle County encompassed the largest population, and for

that matter the greatest population growth, the police facilities quickly became antiquated. For that reason, in the years 1928 and 1929, Station’s 1 and 2 were rebuilt as concrete and brick structures similar in nature. These second facilities included, "a standard steel cell for holding dangerous or violent prisoners." The Chief Engineer for the highway department, Mr. W.W. Mack, also recommended that Station 3 (Dover) be replaced; this was tabled for further discussion.

The twenties came in with a bang and departed with a whimper, under the cloud of "The Great Depression". Caught in the siege of unemployment, gangsters, and elicit booze, the state police began its second decade. 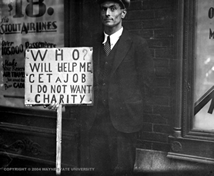 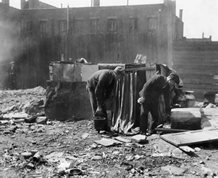 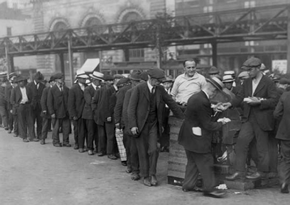 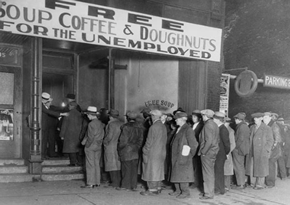