Interest in establishing a state police force began in

Delaware shortly after the turn of the century. The Every Evening Journal relates that, "in 1906 a movement had been inaugurated looking toward the establishment of a state police force in Delaware to do duty in rural districts." An October 17, 1906, newspaper account of a disturbance in Middletown to which Wilmington City policemen were called cites the need for a state police force to maintain peace within the undeveloped areas of the state.

Little action was taken, however, until the State Highway Commission was formed in 1917. The purpose of the commission was to direct the operation of the highway department toward the construction of suitable roadways.

At this time, in Delaware, roads throughout the state were composed of sand and clay. As construction of a paved system got underway and the number of registered vehicles began to increase, the citizenry became concerned about the dangerous situation which was developing. Speeding cars of 35 miles per hour, "roving bands of troublemakers, and bootleggers" intent 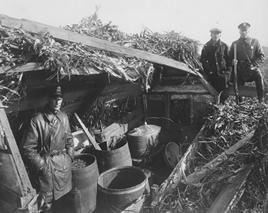 upon breaking the laws of Prohibition led to a renewed interest in the development of a state police force. In September of 1919, Governor Townsend reported that he had received an abundance of letters from the public which voiced concern that the traffic on the Philadelphia Pike was becoming very dangerous. The Governor felt some action needed to be taken at once. Within four months, the Attorney General had acted upon the Governor’s request and on November 12, 1919, he authorized the establishment of a traffic patrol under the auspices of the highway commission.

The precursor of the present Delaware State Police, the State Highway Police, was established on January 1, 1920, with the hiring of Charles J. McGarigle of Wilmington as a traffic officer.

Traffic problems did not abate with the hiring of officer McGarigle, however, and the highway commission requested, in March of 1920, additional funding to place officers on all existing state highways. They were authorized to employ, "not more than four additional traffic policemen for patrolling and enforcing the traffic regulations on the road from Dover to Smyrna and the Philadelphia Pike." Also authorized was a standard uniform for each patrolman. Employment records indicate that the men listed, were the nucleus of the force: Joseph A. McVey hired on April 15, 1920, Raymond D. Ingram hired on May 17, 1920, Earl Cole hired on June 20, 1920, and Harry Ingram was hired September 22, 1920. On October 22, 1920, Harry Ingram resigned and Joseph Bonifacino was hired on November 11, 1920.

To supplement the workload of the small force of paid constabulary, the highway commission authorized the use of a citizens highway police from 1921 to 1923. This force was comprised of a group of unpaid volunteers who served for a period of three months. While on duty they were empowered to enforce the same laws as their paid counterparts.

Details concerning the first uniform of the State Highway Police are almost non-existent. What is known is that it was standardized and consisted of one summer and one winter uniform. The summer consisted of one pair of trousers, one coat, one shirt, one cap, one pair of shoes, and one pair of protective leather leggings called "puttees." The winter uniform consisted of the same garments as the summer, plus the addition of a leather overcoat, leather cap with ears, and a pair of heavy leather gloves. 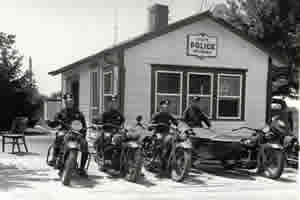 The first ten months of the new force’s existence were spent without sufficient quarters for the patrol officers who were required to spend all their working hours in the field. In November, 1920, the highway commission noted that the traffic patrolmen on the Philadelphia Pike and the Kennett Pike had no shelter during bad weather so a recommendation was made to establish a police headquarters on each road. While no records exist of the Kennett Pike Headquarters, a time keepers shack was set up on the Philadelphia Pike and serve as the department’s headquarters from 1920 to 1923.

In 1920, the staple means of patrol was the Harley-Davidson motorcycle. The State Highway Police

owned six of these machines, complete with sidecars, which were described as being in "first rate" condition. As the decade progressed, it was becoming increasingly difficult to patrol the state roadways with any degree of certainty with the present force, so numerous requests were made to expand the department’s complement. In January of 1922, the State Highway Commission received funding which allowed the addition of one officer. This officer, Samuel G. Powell of Milford, was hired on January 21, 1922, and was assigned to patrol the highway between Milford and Selbyville. Later in July of the same year, a second officer, Francis Ryan, was hired.

Tragically, the tenure of employment for Officer Francis Ryan 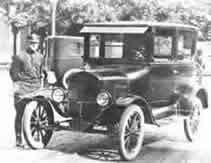 was brief as he was the first state highway officer to die in the line of duty. Officer Ryan was attempting to apprehend a speeding motorist on the Philadelphia Pike on October 17, 1922, when his motorcycle was struck by a vehicle traveling in the opposite direction. He succumbed to injuries sustained in the collision on November 2, 1922. Officer Francis Ryan was buried in Glebe Cemetery, Old New Castle, Delaware. We sometimes forget that these were lonely and dangerous times for the police as they attempted to forge a place in the history of law enforcement and protect the citizens of Delaware. The following excerpt from a 1922 newspaper article succinctly describes the adverse working conditions that these men faced in the performance of their duties:

"Night and day, in fair and foul weather, the State Highway Police are endeavoring to keep the state highways safe for the traveling public. You may meet one of these uniformed officers on his gray 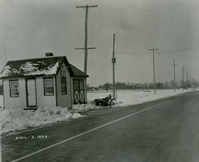 motorcycle anywhere between the Pennsylvania line and the Maryland line at Delmar . . . Driving from a narrow, crooked, rough road originally intended for horse-drawn traffic only, on to one of the new state highways, broad, smooth, and straight you (may) feel an irresistible impulse to let her out and see what your pet motor can do. . . It is very likely you will meet the highway police for they are there to protect you not only from yourself, but from the other fellow even more reckless. To properly police the two hundred miles of the state highway system now completed is a big task for Lieutenant McVey and his three assistants and means long hours of hard riding for the little force, but it is done faithfully and cheerfully and with an efficiency and courtesy that has won the respect and praise of all motorists who know them."

As the year 1922 ended, the highway traffic force, through hiring, resignation, and death remained at four officers and one supervisor. One officer was detailed on the Philadelphia Pike and another on the Kennett Pike, the two great arteries entering Wilmington. The two remaining officers were divided over a stretch of territory embracing one hundred miles. At the suggestion of Chief Engineer Douglas Buck, of the State Highway Department, the stage was being set to formally organize and enlarge the highway police as a state police agency. He suggested, at the end of 1922, that legislation be enacted providing the state with a constabulary organized in a similar manner as Pennsylvania, New Jersey, and Maryland.