The most significant changes to the Department which occurred during the decade of the 1940’s were directly related to America’s involvement in the Second World War. Many uniformed members of the department were drafted into military service during this period, resulting in significant manpower shortages and the closing of two troops.

America’s transition from a peacetime to a wartime economy resulted in the decreased production of certain commercial goods as factories geared their efforts toward the production of products for the military. It was not unusual during this period to see cars equipped with wooden bumpers, because of the scarcity of manufactured parts. After the war, as the active members returned from their tours of duty, operations within the department began to return to normal. A number of new programs were added and the in-service training curriculum was expanded in order to update troopers on the latest methods and technological advances in law enforcement. As the Department moved into the next decade, it would continue to take on additional responsibilities and firmly establish itself as the premier law enforcement agency in the state. New challenges would present themselves as World War II drew nearer, but the small and dedicated force would continue to provide a level of service which evoked the respect and admiration of the citizens of the First State.

In 1940, the department’s complement consisted of 91 uniform personnel including: one captain, three lieutenants, six sergeants, sixteen corporals and sixty-five privates.

That same year, the division purchased nine new Harley-Davidson motorcycles in addition to nine new police cars. Although the motorcycle had been a cost effective and efficient means of patrolling the state’s roadways during the past two decades, the patrol car’s advantages were obvious, and the decades end would gradually phase out the motorcycle for all but ceremonial purposes.

In 1940, the highway department took the first steps toward specialization with the formation of the Criminal Investigation Division at headquarters. In an attempt to address the ever-increasing number of thefts and burglaries, two plainclothes detectives were assigned from each troop to investigate criminal cases and follow them through to conclusion. The Bureau of Identification was incorporated into the Criminal Investigation Division and a new system for filing criminal records was also instituted at headquarters during that same year.

In an effort to curb the increasing number of fatal accidents occurring on the highways, the Bureau of Accident Prevention and Traffic Control was also established during 1940. The bureau was responsible for conducting a thorough investigation and study of all traffic accidents in

order to identify their underlying causes, and recommend possible solutions. In an effort to modernize the department’s system of analyzing traffic related statistics, in 1941, the traffic bureau acquired an electric keypunch machine which could quickly sort out accident data, such as the number and type of accidents and their locations.

That same year, the first modern firearms program was developed

with the construction of a firearms repair shop at Troop 5. The shop was manned by a sergeant trained in the repair and maintenance of the .38 caliber Colt revolvers in use at the time. Previously, weapons had to be sent back to the manufacturer for routine repairs and maintenance. The new repair shop provided a substantial savings in the cost of firearms repair and reduced the amount of time a weapon was placed out of service.

During the first three months of 1942, the radio system was upgraded for the first time, permitting station to station, car to car, or car to station communication. This system would allow troopers to cover larger patrol territories while significantly improving their response time to calls for assistance. The improved communications system would prove invaluable in the next few years as the department’s resources and manpower were depleted as a result of World War II.

The State Highway Commission in 1942 approved a standard summer uniform. The new uniforms consisted of khaki trousers with a blue serge stripe, khaki poplin shirt, blue cap, black tie, black shoes and black belt and holster without shoulder strap. An optional lightweight field jacket would also be issued. Due to shortages in material resulting from the conversion of garment manufacturers from peacetime to wartime production, the material used in the summer uniform was identical to that issued to the military.

In 1942, the department issued a new set of qualifications for prospective applicants. All applicants were required to have a high school education or its equivalent. They were

assignment to the identification bureau, five weeks training in general police work including an assignment of not less than ten days at a troop in each of the three counties. Upon completing the eight-week training course, a recruit was required to have a satisfactory progress report from a majority of the division and field commanders. Having completed all of these requirements, the recruit applicant was issued a complete set of regulations, oath of office, uniform and equipment. He was then considered an apprentice patrolman and was placed on probation for a period of two years.

In 1943, seven female civilian employees were hired for the first time to assist with clerical duties in order to help ease the manpower shortages resulting from World War II. These female employees proved invaluable to the operation of the department and provided the impetus for the establishment of the full time civilian work force which now exists. During this same period, the highway department requested those members eligible for retirement to remain in active service until the department was brought back to its full complement.

In 1944, a new system of rules and regulations were established by which the superintendent was given

the power to reprimand, fine, suspend or dismiss any member of the department who was found guilty of violating certain general orders, special orders or memoranda . The orders covered various aspects of police work, requiring members to perform 18 specific acts which ranged from properly saluting ranking officers and state officials to personal grooming. Another set of rules prohibited the commission of at least 45 specific acts ranging from interfering with the disciplinary process to cowardice and neglect of duty. That same year, the rank of "private" was changed to "trooper" in keeping with terminology used by neighboring state police organizations and the superintendent was given the rank of "colonel" for the first time.

In an attempt to "modernize the image of the department", a new uniform, based on the uniform worn by New York state police, was adopted in 1944. It was designed to conform to the state colors and was described in an article by the Wilmington Journal Every Evening:

" ... the new uniforms of the Delaware State Troopers will be placed in use the latter part of this month ... In order to increase the efficiency of the troopers in the use of firearms, the holster has been changed

from the cross draw type - on the left side- to the quick draw type on the right side. The new uniform is brighter hued than the present dark blue and khaki uniform and one of the most marked innovations is the use of the new buff brown trooper type of Stetson. The blouse or coat of the new uniform is of indigo or dark blue, with light or powder blue trim on the lower part of the sleeves and on the shoulders. Breeches are of light blue with gold stripe. Each shoulder of the uniform has " Delaware State Police " in blue letters on a gold diamond. " The new overcoat is knee-length and is worn over the blouse, and like the blouse is of indigo blue with the same blue trim on the sleeves and shoulders. The Sam Browne belt and revolver holster will be worn on the outside of the overcoat. A Sam Browne belt is also used with the blouse. A summer uniform consists of the light blue shirt and indigo breeches with gold stripe. The holster is worn on a belt, without shoulder strap. The state police insignia with gold diamond shaped background is used on the shoulders of the shirt, as it is on the blouse. A dark blue tie completes the outside dress. Later, when they becomeavailable, boots will be substituted for the puttees and shoes now being used." 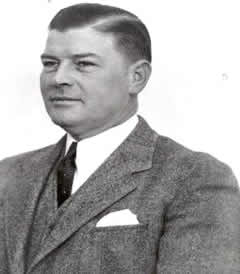 The decade of the 1940’s also bore witness to two troopers to die in the line of duty. On February 22, 1944, Sergeant Thomas Lamb, Troop 3 Commander at Dover, died of a heart attack while on duty in the station. He was the second member of the state police to die in the performance of his duties. He was a 17-year veteran of the department and was a native of Smyrna, Delaware. Sergeant Lamb was buried at the Odd Fellows Cemetery in Smyrna.