The 1930’s ushered in the Great Depression and a whole new set of concerns for the State Highway Police. As the everyday necessities in life became scarce, the highway police began to undertake additional responsibilities due to the rapid rise of criminal activity in the state. Enforcement of the Laws 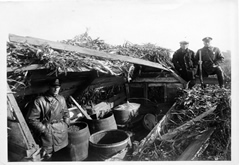 of Prohibition, thefts of automobiles, and petty thefts, especially thefts of livestock, meat and produce were on the rise. As a result, the motorcycle highway patrolmen found themselves being taken from the highways and engaging in a variety of general police duties. The added responsibilities would prompt the General Assembly to enact legislation in 1931 changing the name of the State Highway Police to the Delaware State Police. This was the inception of the full service state police organization which exists today.

At the direction of Superintendent Reynolds in February, 1930, the state police appointed two officers to concentrate on enforcement of the aeronautic laws of the state. They were to spend one day a month inspecting all planes and pilots in Delaware, and enforcing reckless flying statutes. An example of their enforcement action would be the arrest of a pilot for carrying passengers without a transport license.

Due to an increase in the number of petty thefts occurring in the southern portion of the state and the increasing demand for night service, Station 4 in Georgetown began operating on a 24 hour basis in the latter part of 1930. The "special night patrols" were successful in reducing the number of reported poultry and grain thefts which had been occurring in southern Delaware.

In 1930, the department’s annual report detailed it’s complement as follows:

By the mid 30’s, all stations within the State were providing 24 hour service.

As of January 27, 1931, the State Highway Police set the age limit at 21-30 years to apply for employment. On April 22, 1931, the commission changed the age to 21-35 in order to entice more qualified applicants. A two-week training school was later conducted in May, which resulted in the hiring of nine new officers at a salary of $115 per month.

In 1931, the General Assembly passed a bill providing a standard uniform for 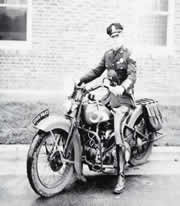 On March 1, 1932, the highway commission authorized a uniform addition allowing a shoulder patch for the coat sleeve. The emblem was embroidered in blue on a khaki field. The design consisted of a blue hen and three chicks, representing the State's three counties, enclosed by a diamond, above which were the words, "state police."

communicate with their stations. In order to improve the department’s level of service to the public, a new system was adopted which required an officer to report his position by telephone to his station every half-hour. This enabled station commanders to keep in touch with their men and provided a more prompt and efficient response to calls for service.

For the first time a teletype service was established between Station 1 and the City of Wilmington in 1934, providing a means of communications with the Wilmington City Police. This allowed information to be exchanged immediately between the two departments, as well as other police agencies in eight states.