In 1935, the old Sesqui Inn, located on the DuPont Highway north of Dover, was remodeled to provide additional office space for Station 3. A set of 30-ton scales was installed on the property and land located behind the building would be set aside for future use as a firearms range. That same year, additions would be made to Stations 1 and 2 to provide more room for fingerprinting and storage.

In July of 1935, the State Bureau of Identification was established at Station 1, Penny Hill. Sgt. William Knecht became interested in fingerprints as a means of identification and criminal investigation. He attended the Institute of Applied Science Course to learn fingerprint classification, built the tables and other special equipment necessary to take fingerprints, and began training other members of the state police in fingerprinting. By the end of 1935, 322 criminal print cards were on file, along with 265 criminal flyers. 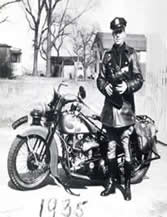 The year 1935 saw a first in the history of the state police, when the highway department purchased a patrol car for each of the five troops, to be used in addition to motorcycle patrol. The patrol cars would prove especially useful during periods of inclement weather, and by the decade’s end, the department’s fleet consisted of 25 patrol cars and 33 motorcycles.

On August 5, 1936, the state police was authorized to purchase police

radio-transmitting equipment, which was installed at Station 2, State Road. In December, 1936, patrol cars at State Road, Penny Hill, and Dover were equipped with radio receivers. Although cars could receive transmissions, they still did not have the ability to acknowledge broadcasts or transmit messages to the station.

During the period between 1937 and 1938, two new state police facilities were constructed in Sussex County. The old wood frame buildings which had served as Station’s 4 and 5 were replaced with new brick buildings designed to accommodate the growing force and its fleet of patrol cars and motorcycles.

On April 27, 1937, legislation was signed establishing a State Police Retirement Fund, and a pension

board to manage it. This law provided for the retirement of members of the state police after 20 years of service. The pension was to be one half of the member's regular monthly salary, payable at retirement. Legislation was enacted to provide disability pensions to members of the state police who were permanently injured in the performance of their duties, and to provide a

pension to the widows and children of active and retired members who die.

By mid 1938, four civilian clerks were hired and assigned to various stations to relieve 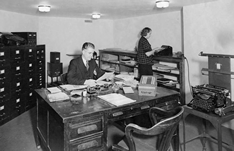 uniformed personnel of paperwork and allow them to spend more time on patrol. In August of 1938, the state police changed their work schedules to three eight-hour shifts per day. Although the new shifts were favorable to the patrol officers, they were still required to work six days a week. 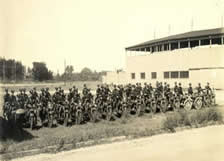 By the end of 1938, the state police had grown to a strength of 85 uniformed members. That same year, the commissioners adopted requirements for state police applicants that called for them to be of a height of 5 feet, 10 inches in stocking feet, between the ages of 25 and 30 years, and weigh a minimum of 160 pounds. The applicants were required to have at least two years of a high school education or its equivalent.

Very few programs were initiated during this period in our history, probably due to the dire economic conditions which existed in the country.

On November 9, 1939, Superintendent Fader requested permission from the Commission, in cooperation with the Delaware Safety Council, to give road instructions in the operation of cars to high school students. This was the first safety education program of its kind to be conducted by uniformed officers in the Delaware public school system.

As the decade came to a close, the state police headquarters was moved from the Odd Fellows

Building on King Street in Wilmington, to a more central location in the county. The cornerstone of the new headquarters building at State Road was laid on February 27, 1939, and by March the state police had physically moved to their new location.

On May 13, 1939, Governor McMullen signed Senate Bill 180 establishing the State Bureau of Identification under the supervision and control of the state police. Later that year, the State Bureau of Identification and the teletype system were moved there as well. The basement of the new building housed a 20-yard pistol range, with six positions and electrically controlled targets. State highway department offices throughout the 1940’s occupied the second floor of the building.