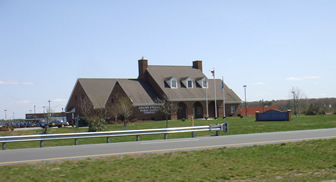 In February of 1975, the new Troop 3 building was opened on US 13A between Camden and Woodside. The contemporary brick building was designed to provide troopers with increased working space and privacy. It featured a basement assembly area where troopers could change shifts, draw work assignments and write reports. The first floor contained offices, special equipment rooms, security rooms and six holding cells.

In January of 1976, the detective division temporarily

relocated from Troop 2 to Troop 1 for a nine month period due to building renovations. Troopers from Penny Hill were housed at Troop 6, although they still patrolled the Troop 1 territory. When the renovations were completed in January of 1977, the building was devoted entirely to criminal investigative operations. In December, 1976, Delaware State Police Troop 8, which housed criminal and traffic patrols for the southern end of the Delaware turnpike, was closed and its personnel moved back to Troops 6 and 1.

On September 23, 1977, the CLUES (Criminal Law Uniform Enforcement System) was used experimentally for several months in Washington, DC. The system was eventually linked to the communications centers in Dover and Georgetown. It provided law enforcement agencies throughout the nation with a central database for criminal history information. For the first time, communications specialists in Delaware were provided with the means of viewing individual criminal histories on a computer screen and disseminating this information to officers in the field.

In 1974, automatic recording equipment was installed in each communications center. The equipment had the capability of recording up to twenty radio and telephone circuits simultaneously and insured the accurate documentation of information concerning calls for police service. In addition, twenty high band radios were installed in patrol vehicles and radio frequencies were changed to allow police to operate on either the low or high band frequency. 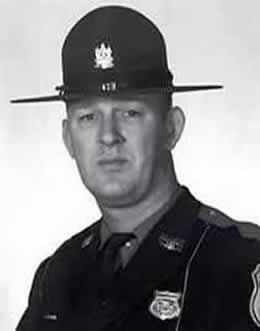 Lieutenant William Jearman died at Delaware Division Hospital after a brief illness on May 12, 1979, while preparing to attend an out of state law enforcement course. He was a 15 year veteran of the Division who was serving as the Assistant Director of the Traffic Section at the time of his death.

A special state police Memorial Park was constructed as a part of the 50th Anniversary celebration. The landscaped park, which paid tribute to our fallen heroes, was located on the front lawn of the academy building in Dover. On May 8, 1975, a monument to slain troopers was dedicated in the park . The monument contained two bronze plaques. One plaque depicted a trooper's head while the other listed the names of the troopers who had died in the line of duty. 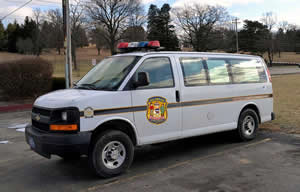 The inception of the Delaware State Police Evidence Units came about in 1975 with funding from the Delaware Agency to Reduce Crime (DARC). Funding received at this time enabled the division to purchase three mobile crime vans and train six officers in a variety of technical skills relating to the collection and processing of evidence at crime scenes. Initially, each county received one van to be stationed at Troops 2, 3 and 4. The vehicles were available twenty-four hours a day to both state and municipal police agencies.

In November of 1975, a Fraud Check Unit was formed at Troop 6 for the expressed purpose of investigating white collar crime. The new unit was a consolidation of past fraud investigation squads. They investigated a variety of cases including: bank embezzlements, bad checks, forgeries and cases involving the falsification of documents. 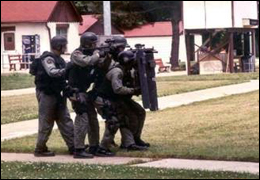 Thirty AR-15 semi-automatic rifles and 15 M16's were purchased to equip anti-sniper teams at each of the nine troops during the decade, and the first Delaware State Police Special Weapons and Tactics (SWAT) team was formed in 1971. The team received training in the use of specialized weapons and was created to respond to incidents requiring a tactical response. In May of 1975, the unit's name was changed to the Tactical Support Unit and its complement stood at seven members.

Tactical Accident Control (TAC) teams were formed in October of 1975, in an effort to reduce the number of accidents occurring on Delaware roadways. The two six man teams conducted traffic enforcement in areas where high incidents of accidents were occurring. The teams used RADAR for speed enforcement and watched for a variety of other traffic infractions which contributed to the causation of accidents.