During this period, the Delaware State Police constructed a new state of the art 53,000 square foot facility, Troop 2 in Glasgow, New Castle County and moved Troop 5 to a newly renovated building along Route 13 in Bridgeville, Sussex County.

The Division also created the High Tech Crime Unit (HTCU) which conducts comprehensive investigations involving computers and computer related technology. In 2007 the HTCU joined forces with the Delaware Attorney General’s Office, U.S. Attorney’s Office and federal law enforcement agencies to form the “Delaware Child Predator Task Force.” This highly successful Task Force is responsible for coordinating online child exploitation investigations and prosecutions throughout the state as they proactively identify, arrest, and prosecute sexual predators who would use technology as a means to target and reach their victims.

Delaware law requires the Delaware State Police to maintain a registry of sex offenders available to the public. The State Bureau of Investigation (SBI) is the section within DSP

responsible to provide this service. The Sex Offender Apprehension and Registration Unit (SOAR) within SBI is responsible for registering and tracking sex offenders as required by the Delaware Sex Offender Registry Law (Megan’s Law). The SOAR unit consists of fourteen employees to include five sworn, four agents and five civilian employees. There are four sworn detectives assigned to the unit to conduct criminal investigations of offenders who fail to follow Delaware’s Megan’s Law requirements. SOAR also has four agents; these were newly created positions in 2008, consisting of recently retired police officers who conduct statewide notifications for all offenders residing in State Police jurisdictions. 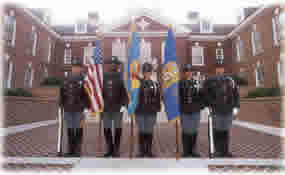 During the decade the Division created a Motorcycle Unit that has been instrumental in providing services in highly congested areas and improving traffic enforcement. Adding to an already impressive Honor Guard Unit was the formation of a Pipes and Drums Unit. Unit members perform at funerals, parades, official state functions and other special events. These units proudly express the Troopers commitment and professionalism to the public we serve.

As we begin the new decade, the Delaware State Police continues to move toward intelligence based policing, community service and commitment to quality services.